Personal ponderings from a natural night-owl!

What a Tangled Web 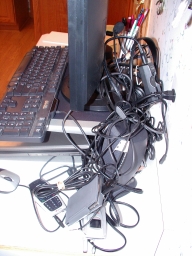 I love having a computer in the kitchen. The room is already the central hub of the house, by virtue of location. Having the computer right there means I can glance at email when I walk in the door, I can listen to NPR streaming while I clean up or cook, and recipes are easily accessible and read right there on the 19 in monitor!

The only problem is the unattractive web of wires. It’s a bit ironic, really, since we have whole house wireless. You can see to the right what our computer area – which also serves as a convenient cell phone and palm pilot charging station – looks like.

Alvin Trusty’s blog recently concluded a 102 post series on efficiency, but he never covered suggestions for reducing the wired clutter. In addition to the Palm cords (charging and sync-ing) and the two cell charger cords, I keep the cord for downloads from the digital camera, camera battery charger, a few headsets, and the microphone for Skyping. The speaker cords, computer cords, and mouse cords add to the mess.

So – anyone have any ideas for cleaning up our area visually?

Even though my personal life list of things to do before I die has been around since the mid-1980’s, apparently the trend of creating such a list is catching on nation-wide! There was an entire story on NPR’s Talk of the Nation this past Tuesday about life lists and there is even a movie coming out about life lists called “The Bucket List” (things to do before you kick the bucket!) starring Jack Nicholson and Morgan Freeman.

It was interesting to hear people’s opinions in the story (one person called the entire idea of a life list “pathetic and sad”) and to read the blog comments on this story. Some people truly find the idea of a life list appalling, though I really don’t understand why. Perhaps these are the people – and I have known some – what think that if you never have expectations, then you can never be disappointed. But I believe they are also missing out on some of life’s highs trying to avoid the lows.

Some were puzzled by the fact that there are actually professional life coaches to help people accomplish their goals. But really, EVERYONE needs someone to be a cheerleader and support person in his or her life. I am blessed to have a spouse who serves that role for me and saddened for my friends whose spouses treat their dreams as unimportant.

Some people were like me and had been maintaining a list like this for years. Personally, making a life list helped me identify and clarify my heart desires, the things I really wanted to do with my life. Having had an 8 year old sibling die suddenly when I was just 12, I certainly understood sooner than most that life is fleeting. I wanted to be sure to focus in on the activities I truly wanted to accomplish. As I became a parent and my focus shifted away from myself, the list helped to keep me grounded in my own desires so that my personal identify wasn’t subsumed in my children.

In general, I believe goals should be SMART – specific, measurable, attainable, realistic, and time bound. (Read more about that here).   In contrast, my life list items are more like dreams than goals: they may or may not be attainable and definitely are NOT bound by realism – the point is to dream and dream big! Many of my items aren’t time bound, either, although some are time-related (like earning enough money for John to retire at age 52).